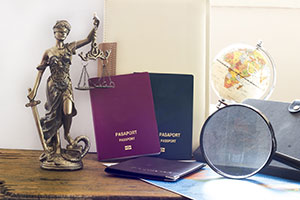 The H1B VISA is a non-immigrant visa in the United States that allows United States companies and employers to hire foreign workers in special situations. These special situations could include specialized medical or technology industry jobs, position in education, or many other jobs defined in the regulation as being completed by specifically-knowledge workers, degreed workers, and skilled workers. These H1B VISA holders may provide workplace solutions in fields such as the sciences, architecture, engineering, mathematics, medicine, education, law, business, and the arts. H1B VISA workers must hold a minimum of a bachelor’s degree, or be considered as uniquely skilled in their field. Some medical-industry positions have additional requirements.

2017 is a new year, and with a new year comes a new United States Presidency with laws made by a Congress. The current immigration environment is in a time of great growth, but also possible change. For example, already this year, the U.S. Congress has already considered increasing the overall wage minimums required for an H1B visa holder to $130,000 a year. The United States President Donald Trump has also suggested removing the or altering the “lottery” system in which VISA holders are selected. The President has also suggested changes involving investigations of “abuse” regarding the H1B VISA and other visas. One offered solution: raising the cost of applications to companies that hope to host H1B VISA holders.

As of this writing, no major changes are due to the H1B VISA program in 2017. Remember any changes made to the program by executive order are still subject to congressional or judicial authority. These changes may be altered or stayed altogether. However, it is wise to consult with a legal professional who specializes in immigration law.

In January 2017, Donald Trump signed Executive Order 13769, which put a temporary halt and conditions on the United States Refugee Program and placed a travel ban on visas from seven countries: Iran, Iraq, Libya, Somalia, Sudan, Syria, and Yemen, for at least 90 days. This ban was blocked by the Ninth Circuit Court in stay of the State of Washington vs Trump. This has not stopped President Trump from vowing to enact a new ban. As of this writing, all visa holders from the affected countries are allowed into the country.

Currently, there is a cap for H1B of 65,000 H1B VISA applicants every year, not including the additional 20,000 visas for foreign students who have earned a master’s degree or professional degree from a United States higher learning institution and wants to enter the workforce. As of February 2017, there aren’t any specific changes concerning the cap, but there is potential for a decrease in the number of applications the United States may accept in a year.

Due to the political climate in the United States, it is recommended that individuals speak with proper legal professionals to determine their specific situation regarding H1B VISA changes and processing. No major changes are due to the program, and any changes made to the program by executive order are still subject to congressional or judicial authority. These changes may be altered or stayed altogether.

The H1B VISA program allows non-immigrant residents to pursue exciting and fulfilling careers in the sciences, architecture, engineering, mathematics, medicine, education, social work, law, business, and the arts, working in a different environment and becoming a part of the great melting pot of skilled talent.

If you or a loved one is considering H1B VISA status, contact an immigration law professional to discuss your specific needs and circumstances, and any changes made to the H1B VISA laws in 2017.